Tax Lawyer Tip – What is Income Averaging and How is it Used by the IRS? Payroll & Income Tax Deductions Infographic 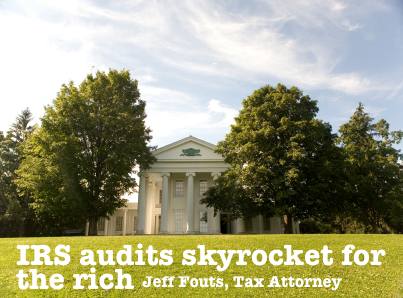 There has been a tremendous rise in IRS audits on high net worth individuals earning between 5 and 10 million a year, and a greater jump in audits for those earning over $10 million per year.

In 2009, the IRS created a special unit to examine the tax returns of high net worth (HNW) individuals to better assess the risk such arrangements pose to tax compliance and the integrity of the tax system.

The Internal Revenue Service in 2011 audited 29.93% or nearly 1 in 3 taxpayers who reported more than $10 million of income, according to statistics released today.

The statistics cover audits conducted in fiscal year 2011, which generally corresponds to tax returns filed during 2010.