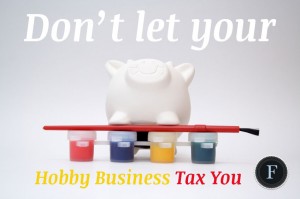 What do fishing, golfing, track and field, and prostitution have in common? All these are real cases of ‘Hobby’ Businesses that were contested in tax court with the IRS. Some people won their case, others did not. Find out more about how the IRS views small hobby businesses and avoid IRS pitfalls by how you structure your business.

Your hobby business could land you in tax court – avoid IRS pitfalls by how you structure your small business.

Many people successfully develop a hobby into a going concern and actually receive income from it. That income must always be reported and taxes paid on that money regardless of your situation. If you leave that hobby as a hobby, under the tax definitions, you are not allowed to deduct any of the expenses incurred by activity in that hobby. That is the reason most people turn their hobbies into businesses once they start making money.

The IRS, on the other hand, does not always see your hobby as a viable business, and that is where tax difficulties arise. There are a number of court cases where the question of hobby or business has been decided for the particular business by the IRS, and under challenge, the cases end up in tax court. Frequently the cases are very similar in all but one or two points.

Consider these and compare them to your situation:
1. Fishing as a hobby or business: In one case, a taxpayer decided to hold fishing tournaments. These tournaments required him to promote the activity through flyers, speaking engagements, and other marketing efforts. He had to recruit participants and sponsors. He intended his hobby of fishing tournaments to supplement his retirement income as he developed it into a business. Through the process, he became an expert in bass fishing. The tax court considered all of this, and allowed his business. (Busbee)

In a similar scenario, a second taxpayer began tournament fishing in his retirement. Sailing everywhere on his personal yacht, he and his wife fished specifically for the pleasure of participating in the tournament, especially when these tournaments were in exotic locales. In this case, the tax court decided this was not a business but a hobby for the activity was not “motivated primarily by the pursuit of profit.” What probably hurt their case, even subtly, was the fact that they had just sold a business and were now millionaires. (Peacock)

At first, the tax court felt that the taxpayer had a profit motive and overruled the IRS, even though the court also made comments about the “recreational” qualities of the contents of his book. The court did like his record-keeping and marketing and felt it showed his professionalism. Then the tax court disallowed all of his deductions, for the taxpayer could prove none of them (remember the cash payments?), but the court did not penalize this taxpayer in any way, saying that he had made a reasonable attempt to comply with the law. (Ralph Louis Vitale, Jr. – When you read this court case, it almost seems like much of it was talked about tongue-in-cheek, and the documents prove to be an amusing interlude among more conventional cases.)

All four of these situations ended up in tax court, with the taxpayer disputing the IRS decision that their activity was a hobby, not a business. You can also see that the tax court weighed “profit motive” most heavily in each of their decisions. Profit is a key decider when considering whether an activity is hobby or business. Is your hobby truly for profit or only for pleasure? That is foremost and basic premise that the tax court considers.

There seem to be two “hobbies” that trigger audits most frequently and those are horses or yachts. Both are money pits, and so if people can figure out a way to make a business out of them, that will provide either tax deductions and/or income to cover the high expenses of each. The IRS knows this, and is very strict when applying the rules to these activities. When structuring these, pay very close attention to business start-up details.

Regardless, if you follow good business practices when converting your hobby into a business, you have a greater chance of convincing the IRS it is a real business. Your business records must be up-to-date and accurate, and your business plan must lay out a course for creating profit from your activity in the future. That written business plan can be a real asset if you end up in tax court versus the IRS.

Consulting a tax lawyer early on in your business efforts will probably be the best investment you make in your business. A tax lawyer can review your actions and recommend steps to build your business in a sound manner. Furthermore, if you do end up facing the IRS at some point, your tax lawyer can defend you or negotiate for you, reducing your stress and exposure significantly. The IRS has their experts—you should too.