Why the Wealthy Care So Much About Taxes

In tough economic times there is always a lot of noise about who is paying their fair share of taxes. With all the political views being expressed it’s hard to tell fact from fiction. That’s why we liked a new report published in May 2013 from the the National Bureau of Economic Research.

They studied tax data over 111 years and looked beyond U.S. shores for patterns of how the rich pay taxes and influence tax policy. Today, I’ll review some of the report highlights and then wrap up today’s article with a take away for middle class Americans and small business owners who owe back taxes.

The top 1% spend millions of dollars to try to change the nature of our tax system. Why do the rich obsess over taxes? According to a recent article by Business Insider using data from the aforementioned NBER report, there are three charts that explain it best.

Top tax rates among the U.K., France, the U.S. and Germany 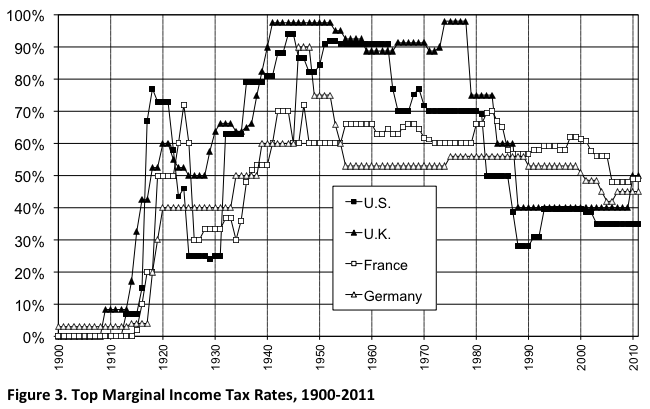 The bold square and triangle lines represent the U.S. and the U.K. respectively. At the beginning of the 20th century, both countries’ top tax rates started low and gradually rose until they were much higher than those of France and Germany, consistent from about 1930 to 1975. Beginning in 1980, this trend reversed. Currently, France and Gemany’s tax rates are a good 10-15% higher. 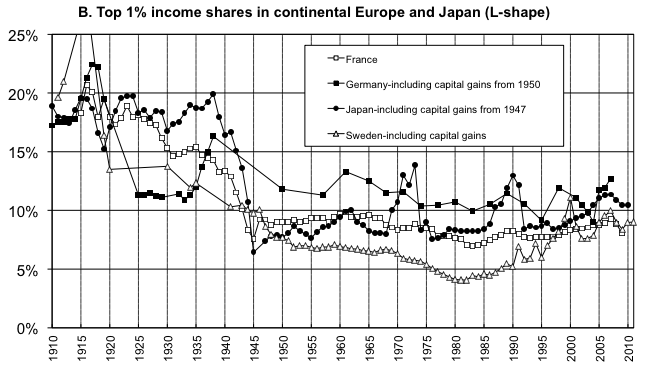 Notice how the shape of both Germany and France’s lines are L-shaped. This means that their income shares started higher in the early 20th century and leveled out for the remainder of the century to now. Compare this to the upside-down L of their tax rates (in chart 1). 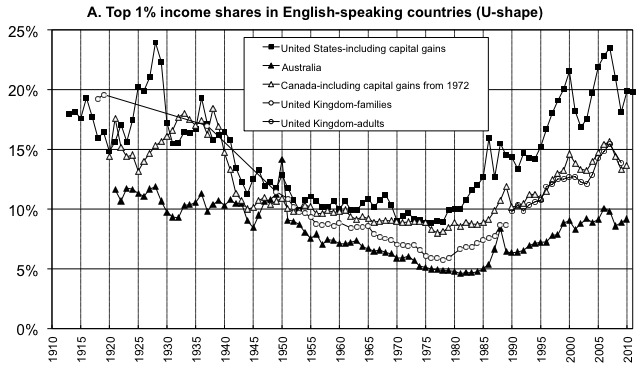 Here, the income share of the top 1% in the U.K. and the U.S. follow more of a U-shape. This inversely relates to their respective tax rates.

In conclusion, there is a clear inverse relationship between the top tax rates in the U.K., U.S., France and Germany and the share of income held by the top 1%. In the 1950s, the top 1% controlled the lowest percent of the income share and paid the highest taxes in the United States. The wealthy never want this to happen again and will pay lobbyists millions to make sure of it.

What do you do if you’re not in the 1% and owe money to the IRS?

While we can’t spend our way out of tax jail, we can mimic the tactics used by the wealthy on a smaller scale.

Donald Trump isn’t going to spend his weekends on a DIY project to prepare for an IRS audit. Maybe you shouldn’t either. If you think you owe more than $15K – $20K in back taxes or stand to lose a similar amount from a tax levy or audit, then an experienced CPA and tax attorney are a good option. Yes, good professional services cost money. But, so does losing your case with the IRS, and the money you stand to lose is often more.

What do you do if you can’t afford any professional help?

In the criminal justice system we’re given access to a public defender. While we don’t have our own public attorney to fight the IRS there is something we all have access to that is along those lines. It’s called The Taxpayer Advocate Service (TAS). The TAS act as your voice at the IRS. Their job is to ensure that every taxpayer is treated fairly, and that you know and understand your rights. Then there’s what you’re doing right now – Internet research. Defending yourself with knowledge and knowhow isn’t just for the rich. Keep searching and develop your own IRS tax strategy.

My final advice is to act. Failing to deal with your IRS tax problem is the costliest move you could make.