The Income Tax Monster 1040 Form Tax Freedom Day: A Day to Celebrate… or a Day to Mourn?

Everyone loves tax credits. There’s no better feeling than finishing your income tax return on (or preferably before) April 15 and seeing that you own nothing… or even that the IRS owes you. Long before the money arrives in your mailbox, you’ve probably spent it on something.

Tax credits seem great! But they come at a cost and it is threatening the fabric of our economic system.

But the real result is much more startling: A dwindling group of people are paying for a larger and larger group of people. Since the dawn of the new millennium, one in four taxpayers are considered “non-payers” because they owe no taxes (or receive money back). The number of non-payers grew by 36% while the number of tax filers grew by just 13%. So the gap is narrowing and the IRS is evolving into a turnstile of money, taking it in and then pumping it back out again.

This is increasing dramatically and it’s not just for impoverished families any longer! In fact, some families earning as much as $50,000 are able to combine deductions and credits to get out of paying taxes.

In this chart, notice how the percentage of returns with no liability is increasing! 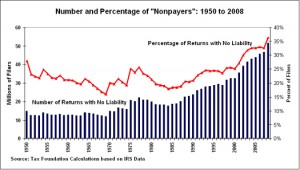 Here’s the reason why this upsets me: tax credits mean the the government, instead of you and I, is deciding to give away our hard-earned money, and deciding whom to give it to.

Democracy being what it is, politicians will buy votes by giving away money that’s not their’s to give away. That will enevitable result, just as it already has, in more and more people getting “tax credits”. This means that a smaller group of high income earners are paying an increasingly disproportionate amount of taxes to support everyone.

If the IRS says you owe money, it’s not just because they want you to pay… it’s because they need to pay off others who are getting an increasing amount of tax credits.

The problem isn’t going away any time soon: Tax credits sound great and win elections. But politicians are just borrowing against the future.

Read more at the Tax Foundation about how Americans are getting out of paying taxes and avoiding societal obligations.