How Can I Get my Offer in Compromise Approved by the IRS? IRS Fresh Start Initiative Helps Taxpayers Who Owe Taxes

The 3 Levels of Pain From IRS Tax Problems 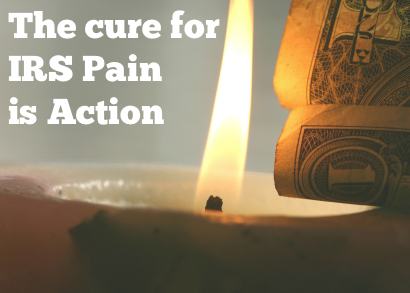 There are many reasons why it makes sense to deal with your IRS problem sooner rather than later.

People with IRS problems sometimes only have an interest in dealing with their problem if the IRS collectors are either standing at their front door knocking, filing a property tax lien, taking the money out of their bank accounts, or levying (garnishing) their pay check.

This point of view is shortsighted. There are many reasons why it makes sense to deal with your IRS problem sooner rather than later.

Oftentimes a person with an IRS problem isn’t thinking far enough ahead. They’re not thinking about the future life issues that will likely impact them and force them to finally deal with the elephant in the room, and constant IRS reminder letters that become more hostile as time passes. My point is that it’s easier to deal with an IRS problem while the pressure is low.

It may help if I categorize the reasons clients often state that they finally reached a point where they were willing to deal with their IRS problem. I’ve listed them below.

There is no doubt that having a significant IRS problem causes pain, the only question is whether that pain will come to you today or sometime in the future. Please don’t wait until you’re pressured by one of the above pains before you take action to get your problem dealt with.

There is a truth that you need to strongly consider: It’s much easier to deal with an IRS problem when you aren’t being pushed, when you’re not under pressure by some pain(s) in your life.