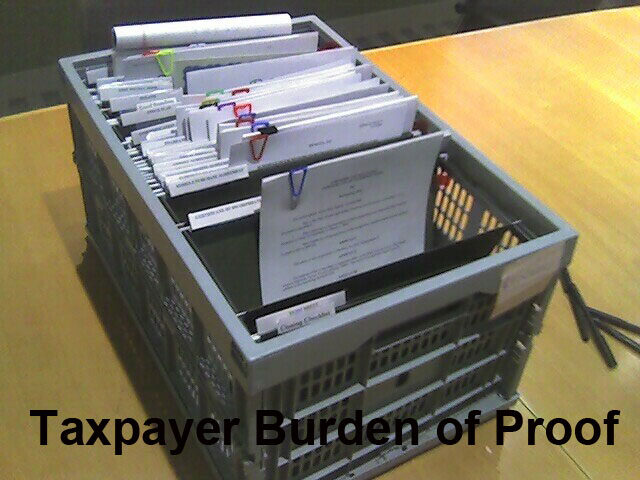 Regardless of the law, the burden of proof still falls on the taxpayer.

We in America have grown up under the concept that we are “innocent until proven guilty.” We celebrate that concept, yet the legal systems of many other countries throughout the world believe that defendants are guilty as charged, in direct contrast to what we believe. Mistakenly, we also believe our concept of innocence is true in tax court, because, as we see it, that court is also part of our vaunted legal system. Today, the idea that the government has to prove its case in all situations is not necessarily true, especially in tax matters.

“Burden of proof” is a legal term which refers to the obligation of a party to prove a point based upon documentation. Prior to 1998, taxpayers had the legal burden of proof in tax court cases, with the implication that they were “guilty until proven innocent.” The IRS simply had to charge them, and the taxpayer had to do the work, regardless of the uneven resources between taxpayer and IRS.

A new law in the late 1990s moved that burden over to the government. However, under that same law, the taxpayer can be made responsible for proof in a number of different situations. The IRS does expect us to prove the “entries, deductions, and statements made on our tax returns.” This taxpayer burden of proof is principally seen in civil cases; if a case is criminal, the burden of proof reverts to the government and the defendant is seen as innocent unless the government proves otherwise.

There really is a practical reason for taxpayers having to prove their deductions. If you were allowed to claim anything without substantiation, by doing this you would place the IRS in the position of having to produce proof that you are not allowed that claim. On one or two claims for one or two people, this would be doable for the IRS. However, if you had most of the people in the US claiming all sorts of deductions without proof, this situation would produce an onerous and impossible task for the IRS to verify that all deductions were proper. There is no way that the IRS could produce evidence to the contrary. Result would be no tax collection, and chaos would reign.

This is a very simplistic explanation of an issue which is both fluid and complicated. If you should have to defend your tax filings in an audit or tax court, you must have good documentation available to you. Your best course of action when preparing taxes is to keep good records of all transactions, business and personal. The length of time that you need to store these records after taxes have been filed varies, but a good rule of thumb is keep records a minimum of 7 years. Even at that, there are some records (especially asset records) which should be retained indefinitely. In addition, always keep your 1040 filings.

As you can see, burden of proof when placed on the shoulders of a taxpayer can be a heavy weight. If you have kept good records, yet find yourself in a tax problem, you should seriously consider using Jeff Fouts, a tax law professional. He has specialized in tax law so that he can help you present your best possible case to the government.