Taxing Online Sales and Its Challenges 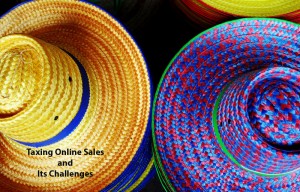 A new law allows your state to collect sales tax on what you purchase in stores as well as what you buy online. There are problems present in the current situation which have not yet been addressed by the states.

Now, not only do you have to pay state sales tax on what you buy in stores, but also on what you buy online. Taxing online sales has been a controversial issue for a number of years. According to a new Georgia law, out-of-state sellers must collect state sales tax if they made $50,000 or more from Georgia sales in 2012. These sales can be generated by referrals from within the state and include Georgia-based websites. While this law became effective on January 1, 2013, Amazon.com, the world’s largest online retailer, isn’t currently collecting tax on online sales shipped to Georgia. And neither are other retail websites. Back in February, a spokesman for Governor Nathan Deal acknowledged that Amazon and Georgia have been in negotiations over collection of taxes for online purchase in order to avoid a court challenge, but nothing has been settled.

Other states have struck deals with Amazon that have exempted them from collecting taxes for a defined period of time. The exchange? Job creation investment. While Georgia and Amazon are not giving any hints on whether there may be a similar outcome from their negotiations, local stores are feeling the heat. They claim that by Amazon and other online retailers not collecting sales tax, they are at a disadvantage because consumers are avoiding extra cost and shopping online. The state has notified several other large online retailers of their legal obligation to collect taxes on sales. If Amazon is to abide by this law, it’s estimated that the state would receive $16 million in annual revenue.

The Senate’s Marketplace Fairness Act of 2013, which was passed 69 to 27 on May 6th, gives states the power to require out-of-state sellers not physically located in the state to collect taxes on sales to individuals who are located in the state. The bill includes a token exception for smaller remote sellers, those with less than $1 million in total out-of-state sales. However, it remains to be seen how this will affect the sales tax collection in Georgia specifically. What’s more, there are several problems with the structure of state sales tax already. Click here to read more about them.