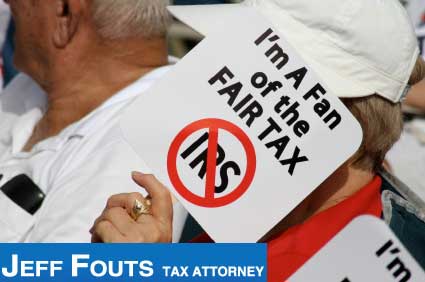 Many people feel like they pay more than their fair share in federal income taxes, but it is important to correctly file your taxes on time and pay the amount you owe the IRS to avoid tax problems. As a Tax Attorney I deal with tax protest cases on a fairly regular basis.

Here’s the thing, this defense against paying taxes doesn’t work. It didn’t work for actor Wesley Snipes and it hasn’t worked for the most dedicated of tax protestors over the years, despite being tested in our courts since the 1950’s.

Back in 2006, USA Today pubished an article on tax protestors that they interviewed me for, and subsequently quoted me in as a tax expert. Here’s an excerpt of the story to illustrate a fairly common tax protestor scenario:

“SOUTH BEND, Ind. — Like most Americans, Peter Smith and his wife, Ellyn Stecker, sit down each year to fill out a federal tax form. Then they write a check to the U.S. Treasury for half the sum in the “amount you owe” box.
They are among thousands of Americans who refuse to pay part or all of their federal taxes as a protest against war and military spending. “It takes two things to fight a war: people and money,” says Smith, 67, a retired math and computer science teacher. “I can’t refuse anymore to go, but I certainly can refuse to send the money.”

No one likes to pay taxes, but in the long run when you protest your taxes by not paying the IRS (regardless of the reason) the Federal Government ends up with its share or you end up in trouble.

I’ll sum up this post today by reprinting my quote from the USA Today Article:

“Jeff Fouts, a tax attorney in the Atlanta area, says, “No matter what argument you raise as to the legitimacy of the tax system, you’re going to lose.” – USA Today War on Tax Waged Against Costs of War

Save your protest for a sharply worded letter to your elected officials, or one of many other forms of protected avenues of protest we enjoy in America such as free speech. It has a lot more chance of helping achieve your ends with none of the dire consequences.

Jeffrey I. Fouts, Tax Attorney
You can put off your tax problem, or put us to work.

Here’s a bio of sorts. I’m happily married with two kids. I’m a real small town tax lawyer (Ellijay, pop. 1,584) not some fictional marketing character. I represent tax payers before the IRS in all 50 states. I have 18 years experience, thousands of satisfied clients, about 8 critics at last count, and an A+ BBB Rating.

I’m a member in good standing of the bar and have active memberships in courts from Georgia to Washington D.C. My competitors covet my Google ranking but my clients covet my sound counsel. I deal directly with my clients and have a small, tireless staff. You can put off your tax problem, or put us to work.