What’s scarier: A Shark or a Tax Collector? If the IRS Can’t Get Your Taxes, They’ll Take Your Stuff

Tax Implications of Citizenship and Expatriation 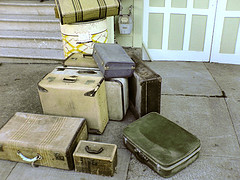 Although most of us don’t take this into consideration, some people choose their citizenship based on tax exposure. They may live in the US because taxes are cheaper here (than elsewhere) or they may move from the US to a location with even cheaper taxes.

In a Forbes.com article entitled “Ten Facts about Tax Expatriation”, Robert W. Wood lists important information that you should know if you are thinking about moving to or from the US in order to modify your tax exposure. I’ll summarize the ten items here but you should read them in greater detail in Wood’s article.

And his ten tax expatriation facts are:

The government taxes all income worldwide. So the money you made elsewhere? The IRS wants some of it.

If you’re going to leave for tax reasons, you need to really leave. You can’t fake it. If you’re here more than 30 days in a year, you are considered a citizen or resident of the US.

There was a loophole that allowed you to get out of some taxes if you left for a reason other than tax avoidance. It comes as no shock to anyone that this loophole was closed.

In 1996, Congress just assumed that anyone with a net worth greater than $500,000 was leaving the US to avoid taxes. Nice!

In 2004, the US decided to stop guessing and just impose a tax on all US-based income for ten years after someone moved away.

There are special rules for long term residents (as if the tax law isn’t already complicated enough).

There’s an exit tax (or, as I like to call it, a “slap in the face” tax) for anyone leaving after June 17, 2008: Essentially everything you own in the world is considered to have been sold at market value and you have to pay a capital gains tax on it…

… unless the income is less than $600,000. So this is a “slap wealthy people in the face” tax. And it shouldn’t surprise you that Woods spends another 2 paragraphs going into detail about the complex calculations surrounding this.

You can defer this tax but it’s complicated.

“Welcome to the USA… now that you’re here, you’ll pay taxes and you won’t be able to leave.”