Tax Freedom Day: A Day to Celebrate… or a Day to Mourn? 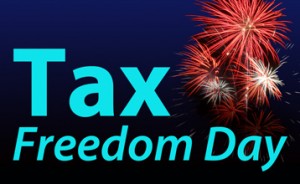 Imagine that instead of paying your taxes at the end of the year, you paid them all at the beginning: Every dollar you earned went to municipal, state, and federal governments until your taxes were paid off for the year. Then, everything you earned after that was yours to keep. It’s theoretical, of course, but it’s a good measure of the tax burden of a country’s citizens. And you can watch to see how this “Tax Freedom Day” moves in order to determine how your tax burden increases every year.

In 2012, the US Tax Freedom Day is April 24. That means, if every dollar you earned between January 1st and April 8th were paid to the government, every dollar you earned after, until the end of the year, was yours to keep. By comparison, in 1900, the US Tax Freedom Day was January 22. And in 2000, exactly 100 years later, it was May 1st. So although we like seeing that our tax burden has decreased (as indicated by the shift from May 1st to April 9th), it’s still a lot of money to pay.

So April 24th is a day of celebration. But it’s also a day of mourning. We should be concerned about the amount of taxes we pay and about where those tax dollars are being spent. And, we shouldn’t celebrate too much that our Tax Freedom Day has moved closer to the beginning of the year because some of the lighter tax burden is simply the result of short term tax breaks enacted by the current administration to help with economic recovery. And more alarmingly, according to the Tax Foundation, if Americans had to pay for what the government was actually spending this year, Tax Freedom Day would really fall on May 17. 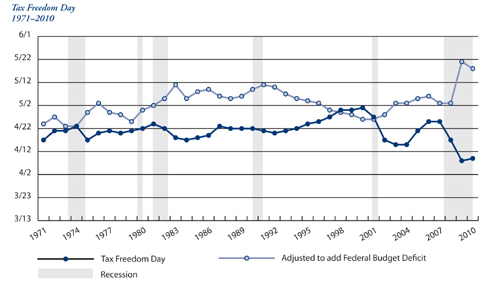 By comparison, though, Norway and Sweden’s Tax Freedom Day is July 29th. So although I don’t like paying all the taxes we do, I’m proud to be an American.