Tax Fraudster Rips off the IRS From Inside Prison 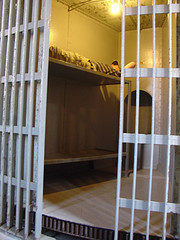 One of the complaints you’ll hear me voice frequently is that the IRS has an overly complicated system of taxation. The result, as I hope I’ve made plain in past blogs (and will continue to shout from the rooftops in future blogs) is this: A complicated system makes is difficult for honest taxpayers to be accurate while at the same time it creates numerous ways through which tax cheaters can defraud the government.

One such fraudster came to light recently: Shawn Clarke stole about $115,000 from the IRS by conspiring with friends and family to fraudulently fill out tax forms. (You can read more about the fraud in detail here but I’ll quickly summarize it below).

Basically, Clarke and his friends and family claimed he was working while he was, in fact, incarcerated. They were able to do this because of the system’s complexity. Just look at how they try to describe what he did: “The inmates and family members filed 1040 EZ forms (the short form) along with the one-page 4852 form, which is a substitute for the W-2 when an employer doesn’t provide one.”

Clarke’s actions are reprehensible and I’m glad he was caught. But this shouldn’t happen at all. While there will always be opportunists who try to work the system, the IRS’ 70,000 pages of tax code makes it easy for people to commit tax fraud. And, the complexity of the system makes it difficult for IRS officers to catch criminals in the act. In fact, you’ll note by reading the article that the only way Clarke was caught was because someone found a note in his prison cell. It wasn’t an eagle-eyed tax auditor.

While tax frauds should be brought to justice for stealing from Americans, it’s ultimately the IRS, and Congress, who are to blame for bringing this on themselves. So what’s the solution? A simpler system! Create a flat tax or a national sales tax and you will eliminate many of these situations. Simplify the tax code, reduce the number of forms to fill out, make it so that we have an easy-to-calculate system and people won’t hate filing taxes nearly as much. And you’ll eliminate the loopholes for opportunists.