“What am I afraid of? The IRS. That’s it. I don’t want those people knockin’ on my door, man.” ~Tracy Morgan 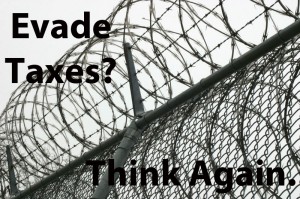 Tax evasion can land you in prison.

Sometimes individuals get into tax problems because they don’t know the rules and have not consulted an expert, such as a tax lawyer or CPA. Other times, they are deliberately trying to circumvent the rules for their own purposes. It is amazing to see the methods by which people think they can outsmart the government. There are very specific rules that we all must follow, and if we don’t, there are very severe penalties that are levied.

In the first part of 2013, there have been a number of tax cases dealing with various tax laws. Embezzlement appears to be a common occurrence. If you should embezzle (please don’t!), you are required to report that “income” on your tax return. In one case in Missouri, a bank employee was sentenced to 12 months and 1 day in prison, plus ordered to pay $664, 500 in restitution. She had embezzled almost $500,000 from the bank, plus another $54,000 from another company before she was apprehended. By failing to report these funds as income on her federal tax returns (2005-2008), the ruling was that she “had caused tax harm to the United States in the amount of $143,623.” Another woman (also in Missouri) embezzled over $257, 688 from her employer by stealing a portion of every payment made to the company, especially the cash payments. This woman was sentenced to 15 months and ordered to pay $318,938 in restitution.

The tax evasion cases, of which there were a number, ended with every one of the perpetrators going to prison for failing to report or pay income taxes. One case included a charter fishing/river cruising company in New Jersey, and the owners kept a large percentage of the business income, yet did not report it. To avoid detection, this business owner had kept a “second set” of books which were found when the IRS searched his home. Prison time plus fines were given to this miscreant and his daughter, since they were both responsible. In another case, a West Virginia lawyer used a client’s trust fund as well as claiming personal expenses for business expenses. From 2006 to 2009, he did admit in court that he had not paid $389,000 in owed taxes. He went to prison for 18 months, and was ordered to pay $780,146 in restitution.

In Ohio, a man was sentenced to 24 months in prison, plus years of supervised release after that. He also had to pay $300,000 in fines. This man conspired to sell counterfeit goods; he also purchased food stamp cards illegally. He then cashed these cards (worth more than $10,000 each). To top all of this off, he did not file the bank reports that are necessary for large cash transactions, and he did file an income tax return, but he used someone else’s name and social security number. The IRS and tax court were not pleased.

Then there is the man and wife in Kansas who filed a fraudulent promissory note to their mortgage lender. In court, they admitted that because of their false claims, the IRS probably lost about $961,569. They both went to jail for a year and a day.

Ponzi fraud schemes also popped up this year. Three men from Minnesota were all sentenced to extensive prison time (90 months, 240 months, and 360 months). They committed wire and mail fraud, money laundering, filing false tax returns, and then of course, tax evasion. They solicited investors, telling them that they could earn a big return on foreign currency trading with no risk. They also told investors that their monies would be held in various accounts and could be withdrawn anytime the investor wanted it. All of this was untrue, and the result was that the government required them to pay $155,359,411 in restitution to their investors. One of the men owed the IRS more than $1.3 in back taxes, and the IRS are still combing through the records of this scheme.

The list goes on with cases citing investment and tax fraud, tax charges, fraudulent investment schemes, securities fraud, false tax returns, tax evasion conspiracy, mail fraud, money laundering, and more. Note that restitution is always far more than the monies they stole. The list of tax court cases is long and extensive, covering every state in the union, and the cases cited here are only from January, 2013. The IRS has a large enforcement arm and great power within our society. Think twice before you believe that you can outsmart them.