Shady Moves by the IRS 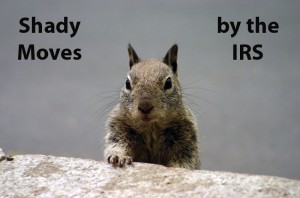 IRS admits targeting various conservative groups, and over recent history, this seems to be a trend.

“The trouble with the profession of tax collecting is that 90% of its members give the rest a bad name.”  ~anonymous

Breaking news has surfaced surrounding the federal criminal investigation into the IRS after they admitted to targeting various conservative groups. According to a report filed by the Inspector General in May, the IRS management is being blamed for the failure to stop employees from singling out of conservative groups for added scrutiny during the 2012 elections.

Here are various shady IRS moves from the past:

• In 2012, The National Organization for Marriage, a prominent anti-gay marriage group, accused the IRS of leaking private tax files that listed Mitt Romeny’s group as a contributor. This fact was used in the campaign against Romney, accusing him of attacking lesbian, gay, bisexual and transgender equality.

• In 2010, Austan Goolsbee, President Obama’s former chairman of the Council of Economic Advisors, told reporters that Koch Industries paid no income taxes. The tax records of the company would not have been public information and should not have been known to Goolsbee. The IRS promised to look into the situation, but a report was never publicly released.

• The Heritage Foundation, a conservative think tank, was a target of the IRS years ago, when it endured politically-motivated audits under both the Carter and the Clinton administrations.

• President Lyndon B. Johnson was accused of promising tax favors in exchange for votes.

• President Franklin Roosevelt was accused of using his political sway to get the IRS to lean on his critics.

It will be interesting to see what Attorney General Eric Holder uncovers in his office’s examination of the facts “to see if there were criminal violations.” Learn more about how to win against the IRS here: http://www.taxhelpattorney.com/tax-solutions/winning-irs-audit/