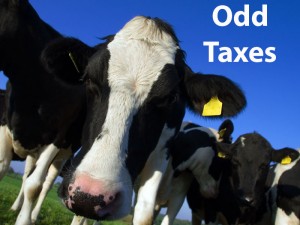 Some sources of taxes are quite bizarre. Taxes through time give us an insight as to what our taxes could look like.

“If Patrick Henry thought taxation without representation was bad, he should see how bad it is with representation.” ~Farmer’s Almanac

Don’t ever assume that those powers who decide our taxes are working on the same reality plain that we are. As economies become stressed, they look at every possible chink in society to come up with different sources of money. Some of these sources are quite bizarre and provide us with great merriment, unless we are the ones who are taxed.

England, probably because of its expensive exploits over the centuries, has had some really notorious taxes. From the 1600s to the 1800s, they have taxed different parts of buildings, including windows (resulting in fewer windows in buildings), fireplaces (many were bricked up as a result of this tax), bricks (so brick makers made larger bricks to reduce their taxes), and printed wallpaper (builders started hanging plain wallpaper and then painting it in different way). Hats became taxed in the late 1700s, so hat-makers called head wear anything but “hat” to avoid the tax. At this same time, wigs were very popular, so the English government put a tax on the wig powders, causing the wigs to become almost immediately unpopular. As you can see, in each case, the taxpayers found ways around the laws, to the annoyance of the government officials.

Personal bodily functions have often provided tax money. Back in the Roman Empire (1st century AD), tanners and laundries used urine for its ammonia content. Urine then became taxed by Emperor Vespasian. Peter the Great in Russia, 1705, wanted the men of Russia to look like Western Europeans, or in other words: clean-shaven. He taxed beards to encourage the populace to comply.

Salt has been important through the years as a preservative as well as an additive in many foods. France taxed salt (gabelle), and this tax became just one of many causes of the French Revolution. The English also taxed salt in the 20th century, and this tax became notorious after Ghandi led nonviolent protests against it. Governments don’t seem to learn from history.

Even the Olympic athletes are affected

Recently, Great Britain sponsored the London Summer Olympics (2012), and again faced controversy for one of its tax laws. Most of the athletes competing were “foreign” athletes, and by British law, all of their endorsement income is taxed specific to the time they spend in Britain regardless of where that endorsement money is initiated. Because of the great international outcry at this, the UK did suspend this tax during the Olympics, but that tax immediately became active again at the close of the Olympics. This tax on athletic income is quite controversial within the competitive world, and many athletes choose not to compete in Great Britain because of it. The British government should ask itself: is this tax really achieving what we wanted it to?

Playing cards and dice have been a target for taxes. England began taxing them in the 1500s, and over the years, raised the taxes significantly on them. As a result, forgeries of playing cards began to appear, simply to avoid the tax. That tax was finally repealed in the 1960s, ending the 400 year life of that tax. Today, the state of Alabama still has a ten cent tax on playing cards.

Probably the oddest recent tax is one placed by Ireland, Denmark, and some of the other EU countries. This might have originated in the “global warming” controversy that surfaced in the 1990s. These countries have aimed this tax at cattle owners. The tax is for cow flatulence or the amount of methane gas that cows produce. Ireland taxes each cow $18 for passing gas; Denmark’s tax is even higher per cow: $110. The claimed basis of this tax is that cows supposedly produce up to 18% of all greenhouse gases.

I think all of us would have some issue with one or more of these taxes, but I doubt if any of us would be like Lady Godiva and make a naked ride protesting taxes. We might end up like William Tell and have to shoot an apple off of our child’s head in punishment for our tax resistance. In that instance, my children would not even have a chance!

Every civilization throughout history has had to tax for the greater good. Historians, however, note that tax laws affect more of citizens’ rights than any outside invader does. When we examine the tax systems from early Samaria on, we find that even if a tax system starts out with good intentions, they have an inclination to become both ineffective and inflammatory over time. Perhaps we could be like the Cayman Islands. There are no income taxes there. There are no property taxes either. How does the Cayman Islands government get the money it needs to take care of its citizenry? It charges import and export taxes. It has all kinds of fees, including tourist fees, transaction fees (remember all the banks located there?), and even work permit fees. Just a different way of extracting money from people—you judge its effectiveness.