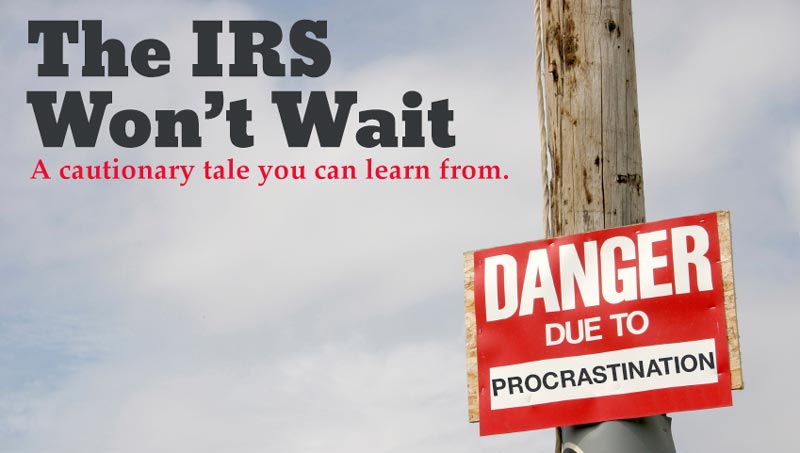 The IRS Fresh Start program that is available to you right now could have saved this man’s house and assets if he had taken action.

The other day I got an email that saddened me.

The email was from a man who had contacted me 2½ years ago because he had a very large IRS debt. He owed $1,000,000 in back taxes, interest and penalties. After we spoke at that time he decided to put off his tax problems for another day. He couldn’t bring himself to take action. He said he wanted to wait.

Time passes and I get an email from him. In the email he sent me recently he said the IRS was suing him in Federal Court to take all his assets. They are taking his house (personal residence) as well.

He said his wife was temporarily disabled, and that he was begging the IRS to not take their home until she was well again, but the IRS wasn’t going to stop their seizure action. He just couldn’t seem to understand the reality that the IRS gets tired of waiting. The IRS saw everything he said as just another delaying tactic. Whether he meant it as a delaying tactic or not really doesn’t matter, because the result was that he never took any action to deal with his problem. All he ever did was think about his problem, and talk about it. Talking about your tax problem and thinking about it is only the first step in solving your tax issue, it isn’t the same as really dealing with it.

His problem could have been dealt with, and the IRS would probably have never taken action to seize the house. The IRS doesn’t like getting put on the back burner of your life. The IRS doesn’t like it when you ignore them. They don’t like it when you pay your other bills before you pay your IRS debt. But they do like it when you come to the table to fix your tax problem. If you deal with the IRS they may well agree to a repayment plan you can afford, or even an offer in compromise plan where you pay less than the original amount owed.

Let me state it plainly, the IRS doesn’t like it that you choose to make your house payment, car payment, or cable bill payment ahead of paying them. The IRS doesn’t view it as a priority for you to pay your grown children’s college expenses. The IRS wants their money from you, and they want it NOW.

If you have a tax problem, you need to be really honest with yourself. You need to ask yourself, “Just how bad does it have to get before I’ll take action to get my IRS tax problem fixed?”

IRS Fresh Start Program Could Have Saved His House and Assets

Just ask the man who emailed me. And don’t make his mistake.

If you’re ready to get answers about your tax problem you can schedule a free consultation with me here. Or give me a call at the office at (888) 995-6785 or contact me here and I’ll even send you a free report on how to solve your tax problems.