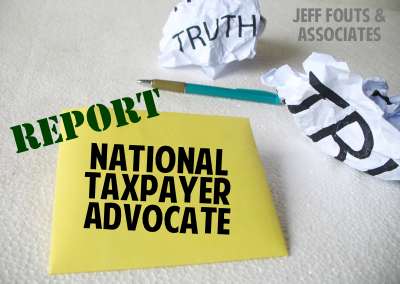 The report states that the IRS now uses “practices and procedures that harm taxpayers by acting on assumptions of noncompliance arrived at by automated processes that do not solicit, encourage or allow taxpayer response.”

This is a summary of findings that were part of the National Taxpayer Advocate Report stating that to deal with its growing and increasingly complex tasks, the government agency is relying more on computer software to catch tax fraud and failure to pay taxes.

Errors are abundant and create additional work for the IRS when taxpayers dispute the IRS agency letters. The IRS increasingly relies on computer systems to evaluate income tax returns which can infringe taxpayers’ rights. It is also getting more difficult to contact the IRS by telephone or letter.

The IRS has an increased workload while its funding is being cut, which causes the IRS to use shortcuts that undermine fundamental taxpayer rights and reduces the IRS’ ability to deliver on its core mission of raising revenue for the US treasury.
The IRS processes over 141 million individual tax returns annually, including 120 million requests for refunds. Congress cut the IRS budget to $11.8 billion, $300 million less than last year and $1.5 billion below the request by the President. They estimate that taxpayers underpaid their tax bills by $385 billion last year, even after using extensive tax audits and other enforcement efforts. The IRS annually collects about $2.3 trillion in total taxes.

The watchdog report said the IRS contacted taxpayers 15 million times in 2010 to change their claimed tax liability, and only 1 in 10 of those contacts was considered an audit. An IRS audit provides taxpayers additional legal rights to contest their tax bill and introduces the ability to go to tax court.

The IRS is relying more frequently on computers to manage individual tax cases and is organized to have less personal contact with taxpayers.

The report states that the IRS now uses “practices and procedures that harm taxpayers by acting on assumptions of noncompliance arrived at by automated processes that do not solicit, encourage or allow taxpayer response.”

The number of taxpayers seeking refunds that the IRS computer program set aside for screening for possible fraud grew by 72 percent, to 1.1 million last year.

False refund claims are growing as taxpayers submit multiple tax returns and fraudulent returns through electronic filing. The increase of complex tax refunds and credits, such as the first time homebuyer credit, contributes to the increase of fraudulent claims.

The watchdog bureau received 21,000 complaints from taxpayers last year after the IRS blocked refund requests due to suspected fraud, of which 75% were legitimate claims.

The IRS corrected over 10 million discrepancies and mathematical errors in taxpayers’ returns in 2010, more than double the number corrected in 2005. The IRS disallowed exemptions for dependent children on 300,000 tax returns, then restored the exemption on 50% of these cases.

The report indicated that six weeks was required to answer half of taxpayers’ correspondence regarding adjustments to their tax returns. The IRS does not accept taxpayer emails, and the portion of phone calls the IRS answered fell from 87 percent to 70 percent.

There are constant changes to the 3.8 million-word tax code. Over the last decade 4,428 changes have been made to the tax code, complicating the IRS employee’s job.