IRS Employees’ Morale Sinks as They Feel Pain of Recession 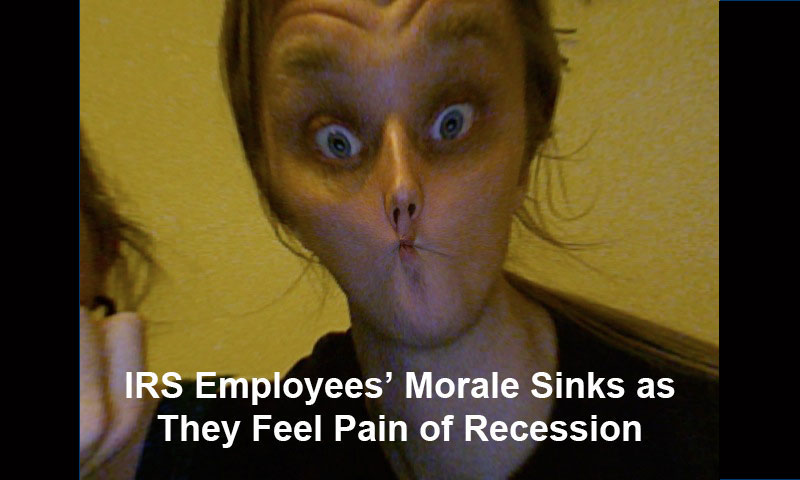 IRS employees are now feeling the pain of recession just like taxpayers.

There is a looming crisis within the IRS that may affect taxpayers and tax professionals.

IRS employees are retiring by the hundreds because of increasing employee discontent. First, the IRS has been downsizing its workforce by not replacing employees who leave their employ. Next, federal budget woes continue to reinforce employee fears of further employee cuts and their own job security. And finally, IRS employees have not received a pay increase in 3 years (just like lots of folks out in the real world).

Current IRS employees are tired of hearing that their workload is increasing due to a smaller workforce. They are being told to work smarter and to become more productive with less resources (just like folks out in the real world). Some IRS offices are running low on paper and ink toner and are unable to restock for varying periods of time.

The fact is that IRS employees, and all government employees for that matter, have been insulated from the fact that this country is in a recession. They are only just recently feeling the pain that has impacted the rest of America for years now. Let me be the first to formally welcome you IRS employees to the real world.

Federal government furloughs that began late this spring have further lowered IRS employee morale. Telephone calls to the IRS take longer which leads to increased frustration from the caller which is often taken out on the IRS employee. IRS employees feel like their employer, the United States government does not care about them and that their ‘customers’ (U.S. taxpayers) disrespect them as well.

All of these symptoms have led to a mass exodus of experienced IRS employees as their cushy jobs have gotten somewhat less cushy. A downside to this for the rest of us is that this mass exodus equates to a ‘brain drain’ within the IRS. Once experienced IRS employees are scarce, who will educate them about their duties and responsibilities to US taxpayers – the tax professionals? Some what. As a tax professional, I am concerned about dealing with inexperienced IRS personnel when I must present a complex tax resolution.

Hope for the Future

But history shows, if you look at the exodus from the IRS in the late 1990s and early 2000s after the Congressional hearings on IRS abuses and the law changes allowing IRS employees to actually be fired, that everything will fix itself in a few years.