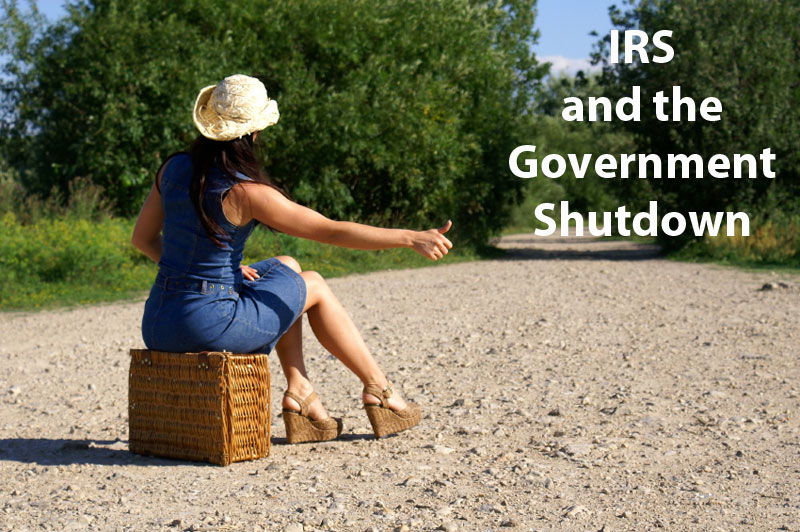 No budget means unfunded government. What is the IRS doing during the government shutdown?

Well, we have entered into uncharted territory once our Congress did not pass a budget on September 30, 2013. At this moment, no one knows how all of this will play out or even how long it will last, so we face a great deal of uncertainty for the future.

Headlines are shouting that non-essential employees are furloughed until further notice. Non-essential employees? How would you like that on your resume? The IRS does have a fairly large number of those “non-essential employees” so many of the agency’s activities are suspended until budget money is restored. The agency has issued 61 pages of details on how it will handle a 5-day government shutdown, but if this down-time lasts longer, the IRS Deputy Commissioner for Operations Support will develop a contingency plan for both personnel and activities.

What Can’t the IRS Do During the Government Shutdown?

The current estimate is that more than 90% of the IRS workforce, between 81,000 to 95,000 employees, will be furloughed during the shutdown. The IRS has already announced that the telephone call centers and the walk-in help centers will be closed. You will not be able to access any IRS assistance. This furloughed group includes the auditors, lawyers, and all personnel from research, analysis, statistics, and the Whistleblower Office.

In addition, and some people may greet this news joyously, all audits will be postponed until a budget is approved. That delay just gives anyone facing an audit a little more time—it does not mean that the audit is going to disappear, so the audited taxpayer remains on the hook.

If you are still due a tax return from the federal government, you will not receive it (ostensibly because of the shutdown) until after the government gets restarted with a new budget.

Although at the present time, there are about 13,000 IRS vacancies, no new employees will be hired during this non-budget period, unless on the slim chance that they would be necessary to protect life or property.

What Will Be Happening at the IRS during the Government Shutdown?

Not all IRS activities will be suspended during this limbo period. October 15 is the deadline for the 12 million taxpayers who requested a six-month extension for their taxes. This is still a hard deadline and the tax returns and any outstanding taxes are due no later than the due date of October 15.

This is one instance of an old saying coming true: nothing is certain except death and taxes. Guess what? You are still required to pay your federal taxes during this period.

Some staff will stay working. These employees are primarily in the department which assures taxpayer privacy, the Online Fraud Detection and Prevention office, as well as some of the administrative offices. There is also some indication that the IRS employees will continue to create the tax forms for 2014 as well as test the appropriate new software for the agency.

We all realize how complicated it is to shut down our governmental activities, and know that it will be just as complicated—if not more so—to get the entire behemoth restarted. This is a period of great confusion, so make sure that you still comply with the adjusted taxpayer rules during this time. If you find your situation difficult to manage, call Jeff Fouts, Tax Lawyer, to help during a tough time. Jeff Fouts stays current on all IRS activity (and non-activity), so can protect your interests in a period of chaos.