Cheating On Your Taxes: Real Numbers and an IRS Solution

Along with the answer of “completely unacceptable” (the orange bars in the graphic below), somewhere between 6% and 12% believe that it is okay to cheat a little here or there (the light blue bars, below). And 3% to 5% of respondents believe that you should cheat as much as possible. 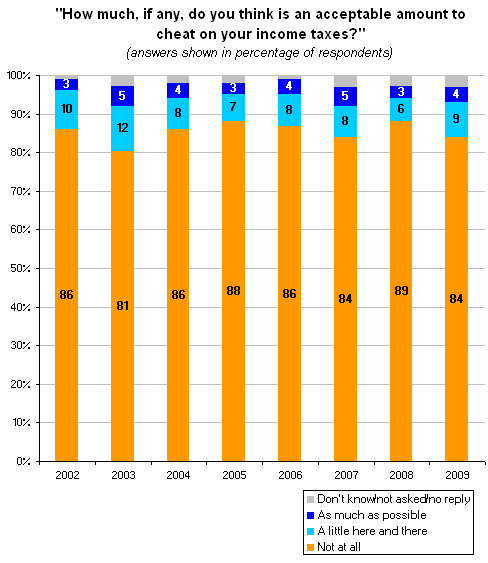 You can read the rest of the article at the New York Times.

So I went and dug up the number of tax returns filed to see what this meant in real numbers. Let’s use 2008, because we have all the data we need from that year:

According to a report by the IRS, 155 million tax returns were filed.

Those are interesting numbers. Here’s my take on them: I believe in paying less tax, but I believe in doing so legally. The IRS needs to be more understanding with people who are having difficulty paying their taxes, and they need to offer them real options to help them with their tax debt.

Most people with IRS problems want to want to pay their tax debt, but if money is tight, they need the IRS to be more willing to work out an arrangement. Whether that’s a payment plan or a living standards Offer in Compromise settlement offer.

And just as importantly, the IRS needs to create ways to reduce the number of income tax cheaters (13,950,000 tax returns have some form of dishonest response).

By being so tough on honest people who are having trouble paying their tax debt, instead of going after the cheaters, the IRS is not doing its job as well as it sould.