Financial Hardship and the IRS 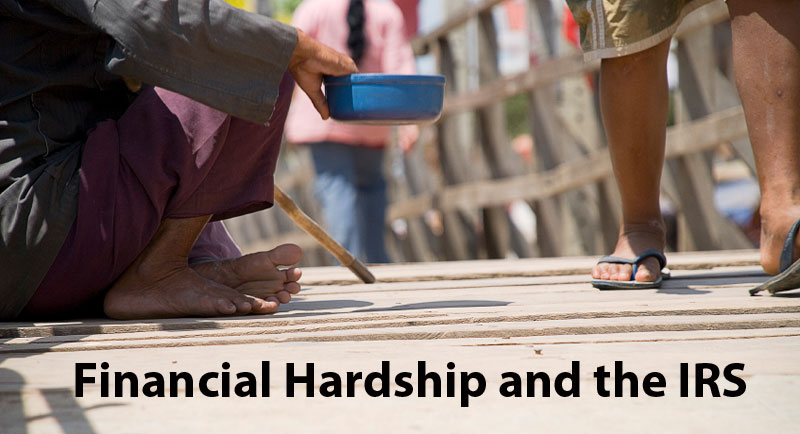 You must be able to prove financial hardship in order for the IRS to consider suspending levies.

There is a court case, Vinatieri v. Commissioner of Internal Revenue, settled in 2009 which has become precedent for setting the IRS collection standards and financial hardship. Ms. Vinatieri first learned that the IRS was going to levy her wages in the year 2007 because she had not paid her 2002 taxes. She did file for a hearing, and in that hearing, explained that she was dying from pulmonary fibrosis. She had no assets which could be liquidated and only worked part-time, earning about $800 a month. She did submit Form 433A (Collection Information Statement for Wage Earners and Self-Employed Individuals) which showed that she had no funds available to pay the IRS.

The settlement officer initially agreed with her and decided to place her case in the list of “currently not collectible.” Upon further investigation, this officer reversed his decision and wanted to go ahead with the levy after he found that Ms. Vinatieri had not filed her taxes in 2005 or 2007. He considered her to be non-compliant, and therefore could not be considered for a collection alternative.

Ms. Vinatieri filed with the Tax Court, and after the filing was unable to attend court, and was unable to get legal representation because of her inability to travel. She again reiterated her dire economic straits through appropriate channels.

The Tax Court rejected the Commissioner’s requests, calling this an abuse of discretion, and looked at the IRS regulations which pertain to levies. In this instance, the IRS should have released this levy because of the severe economic hardship it would cause. In addition to that, the Court ruled that in instances like this, the taxpayer has a right to a hearing before any levy can be employed.

As you can imagine, this tax court case became the basis for a number of succeeding cases, most of which did not meet the initial criteria. In these later cases, most of the taxpayers did not file the proper tax forms, and in many cases, did not show financial hardship or even file their tax returns. Almost all of them lost their cases.

The National Taxpayer Advocate today raises the issue as to whether unfiled tax returns should even be considered (under the Vinatieri case) because in doing so, the IRS has the ability to treat taxpayers differently, and this can lead to a number of collection issues which might cause the IRS to end up in a US District Court.

Currently, the IRS is placing levies on payments regardless of the circumstances, but the National Taxpayer Advocate is requesting the IRS to consider hardship cases even if the taxpayers have not filed tax returns. This issue is yet to be decided.

Currently, if you are in a dire economic condition, you need to be able to prove this by filing the appropriate paperwork with the hearing officer (Form 433A). By doing so, this is the only way that the Tax Court can consider your information and determine whether you are eligible for economic hardship. If you claim hardship, you must be able to prove hardship.

Once this is done, you and your tax lawyer need to propose some type of payment plan/collection method which you will be able to pay. Do not reject any proposals from your hearing officer until you discuss them with your tax lawyer. It is important that you stick to the facts of your case and make a strong presentation. Don’t get sidetracked into other issues that the court can deem frivolous, for that will jeopardize everything you are trying to accomplish.

As you can see, financial hardship creates tax issues along with all of the other problems it brings. You do need a good tax lawyer to help you through all of this, and negotiate the fine points of any type of settlement. Jeff Fouts, Tax Lawyer, is quite familiar with these types of cases and can professionally assist you to a settlement.