Let’s All file a Complaint Is it Possible to Run a Business That Doesn’t Get a Complaint Occasionally? 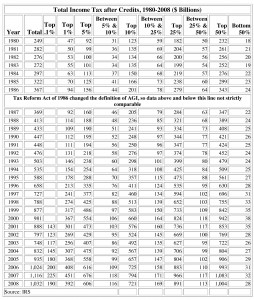 The latest Internal Revenue Service data on individual income taxes, which includes up to calendar year 2008, was released recently and the Tax Foundation compilled some interesting facts from it.

It found that 2008 was “a year of economic recession in which the world’s financial system was temporarily in a perilous state.” It was also a year in which the amount of individual income taxes paid fell by $84 billion.

Because there was less income generated, the distribution of the tax burden has been a bone of contention in the media. The average income tax rates in 2008 were at their lowest levels since 2004. It has been suggested that the higher end of the income scale have not been paying their fair share, and the income gap has been growing.

While the top 1% of taxpayers declined in their percentage of the total adjusted gross income, there portion of paid taxes also fell. “Each year from 2005 to 2007, the top 1 percent’s constantly growing share of income earned and taxes paid set a record. That trend reversed in 2008. In fact, the income share for the top 1 percent of tax returns was lower in 2008 than in 2000, largely due to differences in capital gains.”

“Overall, these data on high-income tax returns appear to confirm that the recent recession had the same diminishing effect on income inequality that most recessions have, and that it occurred for the same reason, a sharp decline in income at the high end.” This suggests that this recession has NOT increased income inequality, as has been reported in some media outlets.

In pure dollar amounts for the last three years that official data is available, the top 1% paid $392 Billion in 2008, $451 Billion in 2007, and $408 Billion in 2006. See the accompanying chart for further details (Tax Foundation Fiscal Fact, No. 249. Table 4. October 6, 2010). It can be seen that since 1987 the amount of tax paid by the top 1 percent has gone from $92 Billion to well over $400 Billion — which represents a percentage of the total combined income taxes paid of just under 25% in 1987, to a high of more than 40% recently. In that same time frame, the percentage adjusted gross income of the top 1% in comparison to the total has gone from 12 to 20 percent. An 8 point increase in raw income reporting, in comparison to a 15 point increase in the total burden of tax payments.

Based on the IRS’s own data, it objectively appears that higher income earners are paying more than their share of the IRS tax burden.

Until next time,
Jeff Fouts