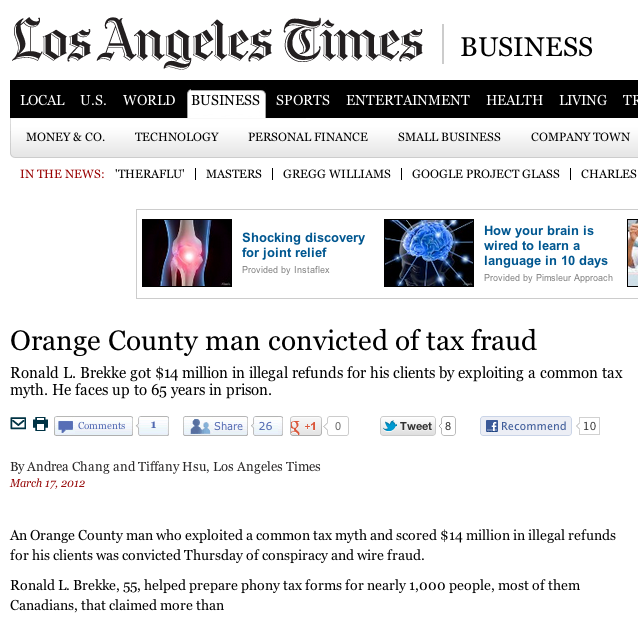 On March 17, 2012 The Los Angeles Times reported on a case of Tax fraud where a man was convicted and faces up to 65 years in prison.

As we head into the final days before our tax filing deadline I want to remind people of the risks of tax fraud.

An Orange County man who exploited a common tax myth and scored $14 million in illegal refunds for his clients was convicted recently of conspiracy and wire fraud.

Ronald L. Brekke, 55, helped prepare phony tax forms for nearly 1,000 people, most of them Canadians, that claimed more than $763 million in fraudulent refunds from the IRS, prosecutors said. Most of the false claims were caught by tax officials before they went through, but about 2% of them resulted in refunds being paid out.

After a two-day trial, a jury in federal court in Seattle deliberated for two hours before returning a guilty verdict. Brekke will face up to 65 years in prison when he is sentenced June 15.

Prosecutors said Brekke promoted what is known as a 1099 OID fraud, which, according to the Internal Revenue Service, is one of the most common schemes pulled during tax season.