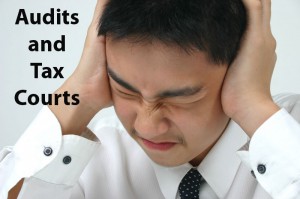 Audits start with a letter, and if not resolved, can end up in tax court. Knowledge is power, so know how to deal with an audit, particularly if it develops into a tax court case.

“Dear IRS, I am writing to you to cancel my subscription. Please remove my name from your mailing list” pens Charles M. Schulz as Snoopy.

Any missive from the IRS can stop the heart for even if you have done everything right, you probably still fear the power of the Internal Revenue Service. Most of you will never see an audit; in fact, approximately only 1% of the middle class is normally audited. That means out of about 140 million tax returns, about 1.5 million returns are actually audited in some manner. However, if you earn over $1 million, that audit probability goes up to 8.4%.

Most of the time, the IRS letter is just asking for more information or clarification. Sometimes, you will receive a letter which says that the IRS has looked over your return and feel that you owe more money, thus here is a bill for that outstanding amount. At this point, be cautious before you write the check. I recently spoke with a small business owner who received one of those letters. Knowing that he had paid all of the required taxes, he took the IRS letter to his tax preparer with his substantiating documents. They found, after several phone calls, that the IRS had not inputted all of the information that the taxpayer had submitted. With some correspondence, this business owner was able to clear up the matter without sending more tax money to DC. His tax preparer applauded him for checking; she said that many of their clients will just send the check to the IRS to get rid of the problem, whether they owe the money or not.

Sometimes, you will receive a letter or phone call (you will still receive a letter after that phone call) informing you that the IRS has questions to ask you.  At times, the IRS will require you to bring your documentation supporting your tax return into one of their offices. This is called an Interview Audit. Or for other tax payers or small businesses, the IRS will conduct what is known as a Field Audit. In this case, agents will actually appear at your home or business to look over the disputed items. In either instance, the agent will give you a written request for which records they wish to see.

Tip: Pay attention to ANY letter that you receive from the IRS.

After your audit, you will end up with three possible results. The IRS can decide that your tax return was correct and no changes will be made to your tax bill; the taxpayer and IRS can agree that additional taxes/changes are owed; or, the IRS can propose new taxes/changes and the taxpayer can disagree with what is proposed. When there is no change, there is obviously nothing else to be done and your audit is completed. If you and the tax man agree that changes need to be made to your tax report—and most cases are settled this way—you will sign a document listing the changes and if additional taxes have been incurred, you will have to pay them.

If you and the IRS disagree on the results of the audit, there are a number of possible actions. You can request that a manager review the documents, you can request mediation, or you can appeal the results of the audit. The manager’s opinion and mediation are self-explanatory. In an appeals situation, many of the cases are settled administratively, but there are a few which cannot be resolved and you then have the option of going to Tax Court.

The US Tax Court is probably one of the most influential yet least known courts in the nation. It was established in 1924, and today is staffed by 19 Presidential appointees who serve for 15 year terms. These judges travel to various cities for trials, and in this system, there are no jury trials—only one judge presides. Court rules are different here.

When you petition to go to Tax Court, you can decide if you wish to receive “Small Case” status. That status is usually granted to cases under $50,000. This type of case is more informal and usually tends to be less complicated. After the final decision is granted, neither you nor the IRS has any right to appeal. The case is done.

If you decide to go to Tax Court, this setting is much more formal following traditional court procedures. Yes, you as taxpayer can represent yourself here, but why would you want to? To do a really good representation of your case, you need a thorough knowledge of tax law as well as court procedure. This is not the time to think you can skim through the proceedings—that would be a disaster for you. A tax lawyer is the person who can represent you best in front of this court. Your tax lawyer will organize your case in the best possible way for you. These cases are won because of good preparation, not histrionics a la Perry Mason. Your lawyer wants no surprises for anyone involved—you, the judge, or himself. A surprise could bring down your entire case. With this high level of preparation, the tax lawyer will walk into court in a position of strength. The IRS does not like losing cases in Tax Court, so their lawyers will be open to pre-trial settlement, and with your lawyer being an expert in negotiation, this will probably work to your advantage. Over 90% of all cases are settled out of court between the taxpayer, his tax lawyer, and the IRS. Early settlement is a good thing, for it reduces the legal costs for you, and your lawyer has the ability to control the outcome. Oftentimes, the IRS will even settle for much less than they originally wanted.

If there is no pre-trial settlement and the case is heard by the Tax Court, their decision can take up to a year to be declared. The Tax Court judges are very cautious when making decisions for the cases which go through the Tax Court are extremely influential in establishing future tax laws. Many of the cases serve as the basis for tax policy, especially for businesses.

Ultimately, if you disagree with the decision of the Tax Court, you have the right to appeal to the US Supreme Court.  This is highly unlikely though, for most cases are settled before they even reach Tax Court. Trust your tax lawyer: he can usher you through this legal labyrinth, finding you the best possible outcome in these difficult circumstances.