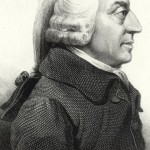 Adam Smith wrote the book “The Wealth of Nations”, a massive work that set the tone for employment, economics, and industrialization in the US. Published in 1776, much of Smith’s work is as relevant today as it was back then.

Among his many insightful economic positions, he believed that taxes were a good thing but they should be “certain, and not arbitrary”.

No one here disputes that we shouldn’t have taxes. Taxes are necessary to pay for roads and police and the many other services that come with living in the US. But what we do have a problem with is that the tax code has become a tool to redistribute wealth, taking it from some and giving it to others, ultimately redefining the American Dream into something that looks more like a socialist economy.

Adam Smith believed that taxes should be “certain, not arbitrary” but our taxes right now are anything but certain! Filling out tax forms – accomplished by wading through an overwhelming number of forms and documents – is akin to pulling the lever on a slot machine… but a slot machine that punishes you instead of rewards you!

Smith proposed a flat tax. While I realize that there are many challenges to implementing a flat tax, and there are reasons why a flat tax might not work, it is the most equitable form of taxation because it is certain and knowable. In fact, a flat tax might actually decrease the amount of bureaucracy and expense incurred by the IRS every single year in trying to understand their own tax code and then trying to enforce it.

The Washington Times has a fascinating article that starts by talking about the IRS and how IRS employees are receiving a growing number of threats for trying to enforce Congress’ tax laws but then, on page 2 of the article, it launches into a scathing examination of IRS employee culpability and ultimately concludes with other great thoughts by Adam Smith. Read the full article here.