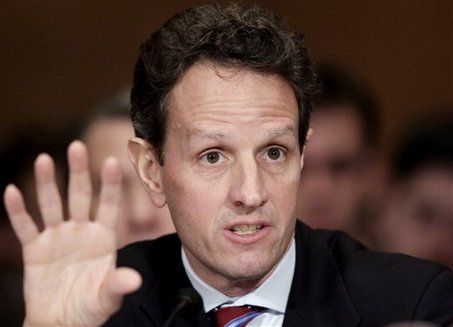 If I was pulled over for driving 75 mph in a 55 mph zone, and I received a ticket, most people would say that I deserved the ticket. I would agree.

But what if I was going 75 mph in a zone where the posted speed limit was posted as “the square root of 3025”? The very thought of requiring a calculator in order to drive the limit is laughable.

And wouldn’t it be ironic if I was going 75 mph in a zone where the speed limit was posted as “the square root of 3025” but I was the one who had helped to create that sign? Some might say that I should know better. Others might say that my mistake was a natural consequence of an overly complicated system and bureaucratic Internal Revenue Service.

Thankfully, our speed limit signs are clearer than that. But our tax laws are not. They are far more complicated. And the above situation is going on right now with a highly placed politician.

Tim Geithner is the Treasury Secretary under Barak Obama (and most of you know that that Treasury is in charge of a number of things including the IRS).

And guess what Mr. Geithner did: He failed to correctly file his income tax during the years of 2001 and 2004, resulting in more than $40,000 worth of errors. Now, just to be clear, he DID file his income tax returns. This is not a story about tax evasion. However, he committed two errors, which are fairly common:

To Mr. Geithner’s credit, both issues were resolved:

You can read more about the situation here.

But the reason I titled this blog “A telling mistake” and told the speeding story at the beginning was to illustrate the following: Tim Geithner is an educated man who works very close to the pulse of finances – first with the IMF and now with the Treasury (and IRS).

And if he makes an error on his income tax returns that is common, how much easier is it for the hardworking men and women of the US who are NOT as close to financial decision-making?

We need an income tax system and IRS process that is simpler – Just ask Bill Gates.