Celebrity Tax Problems: Arnold Schwarzenegger Is the IRS easing up on tax liens? No.

8 Reasons IRS Tax Audits are like the Salem Witchcraft Trials 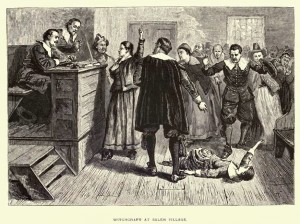 1. It’s scary. They come to you: One night, there’s a knock on your door. It’s not the neighbors bringing over some freshly baked cookies. If the year was 1692, it was a mob with torches. If the year is 2010, it’s someone in a suit. Either way, it’s not a joyful occasion.

2. Claim a higher authority: The Salem Witch Trials over-extended the moral authority of respected public and religious offices. Today’s tax audits extend (and I would say they over-extend) the authority of the government.

4. Guilty until proven innocent: In both cases, they didn’t come to you because you were average. The IRS came to you assuming that you’ve done something wrong and you have to prove that you didn’t do anything wrong.

5. Nothing you can do about it: Neither situation is one where you can take your time and appeal to rational thinkers during the audit. Auditors are out for blood and will leave no stone left unturned to find it.

6. Not a clear understanding of the rules being broken: In the Salem Witch Trials, those putting witches on trial weren’t exactly clear about how they defined and measured witchcraft, and what to do about it. Similarly, during an IRS audit, no auditor can be fully aware of the thousands of pages of tax code that could work for you or against you. The auditor is simply working on “best guess” and what he or she can recall or easily research.

7. (If you’ll excuse the language) “Damned if you do and damned if you don’t”: In Salem in 1692, an accusation was just the first step but it was very likely that you’d end up with a guilty verdict. Even those who were innocent of these crimes endured a lot. During a tax audit, your life is turned inside out and upside down and even if (by some stroke of luck) you have never missed a receipt or overlooked an expense, you’ll still endure the pain and frustration of an audit.

8. Scarlet letter: Audits don’t go away easily. You can be sure that the information gleaned during an audit will be used to verify information later. And if the audit reveals that you do owe taxes, the odds are high they’ll watch you closely afterward to make sure you continue to obey the tax law.